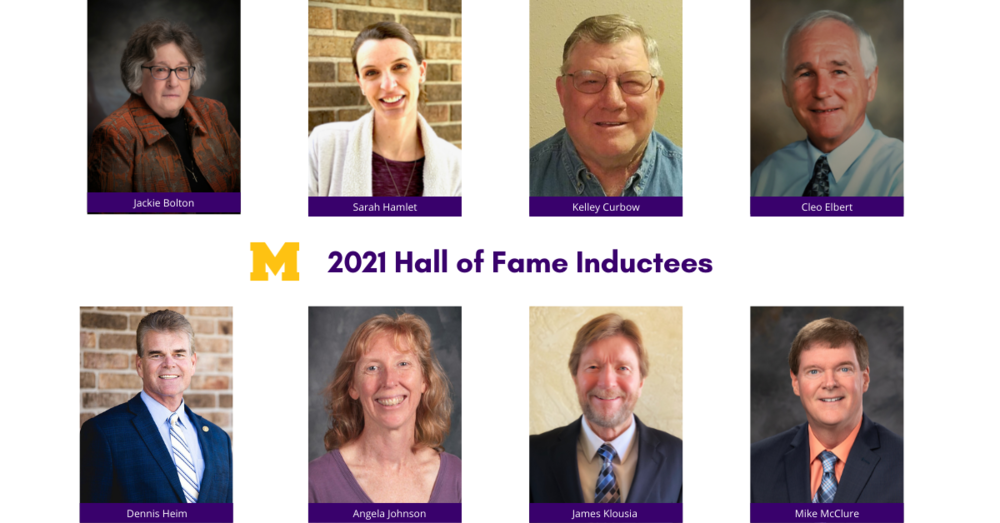 After a year of organization, planning, and accepting nominations, the Monett Hall of Fame committee is proud to announce the members of the Inaugural Hall of Fame Class.

Sarah Hamlet - Athlete: Sarah Hamlet is a Monett alumnus who graduated in 2003. During her high school career, she played Basketball, Volleyball, and was a member of the Big 8 Conference Champs in Track. She earned various All-State recognitions in Track, set the School Record for Long Jump, and received the Sebben Award for 2003 Outstanding Class 3 High School Track and Field Athlete.

Kelley Curbow - Athlete: Kelley Curbow graduated in the Monett Class of 1970. He was a letterman in both Football and Basketball, played Football at the University in Missouri, and was invited to the Kansas City Chiefs Camp.

Cleo Elbert - Coach: Cleo Elbert was a Monett Basketball coach from 1981-2000. During Cleo's 19 seasons as head coach, his teams were 7-time undefeated Big 8 Conference Champions. He was named Coach of the Year five times and was inducted into the Missouri Basketball Coaches Association Hall of Fame in 2006.

Dennis Heim - Athlete: Dennis Heim graduated from Monett in the Class of 1974. He was selected in the All-Conference, All-District, and All-State in Football in 1973. He was also a member of the First Football State Championship team in 1971. Dennis was inducted in the MSU Athletics Hall of Fame in 1994 and the Missouri Sports Hall of Fame in 2021.

Angela Johnson - Athlete: Angela Johnson graduated in the Monett Class of 1987. After 28 years of service as a Special Education teacher and coach, she is retiring from the Monett School District. During her high school career, Angela was in Cross Country, Basketball, and Track/Field. She was a 4-Time State Qualifier in Cross Country and 3-Time State Champion in High Jump in Track/Field. She also ran track for the University of Missouri. Angela received the Wynn Award from the Missouri Sports Hall of Fame in 2016.

Mike McClure - Contributor: Mike McClure graduated from Monett in the Class of 1980. He has been broadcasting multiple Monett events since 1985 for a total of 36 years. He is the President of McClure Broadcasting, LLC, play-by-play broadcaster for ESPN and ESPN3, and the Missouri Southern State University Football and Basketball broadcaster. McClure was also an inducted member of the Missouri Basketball Coaches Association Hall of Fame in 2017.

The Hall of Fame Class of 2021 will be recognized with a celebratory dinner in the fall. They will receive a plaque and a ring for their accomplishments during halftime at our home football game on September 10, 2021.

Congratulations to all the inductees into the Monett Athletic Hall of Fame Class of 2021!